The Wild Girl by Kate Forsyth

SUBSCRIBE to our newsletter to hear when early bird registration opens http://eepurl.com/bgWm49 And

Kate Forsyth wrote her first novel at the age of seven, and is now the award-winning & internationally bestselling author of more than 20 books for both adults and children.

Beauty in Thorns, the extraordinary love story behind the Pre-Raphaelite artist Edward Burne-Jones’s famous painting of ‘Sleeping Beauty’. Other novels include The Beast’s Garden, a retelling of ‘Beauty & the Beast’ set in the underground resistance to Hitler in Nazi Germany; The Wild Girl, the story of the forbidden romance behind the Grimm brothers’ fairy tales; and Bitter Greens, a retelling of ‘Rapunzel’ which won the 2015 American Library Association Award for Best Historical Fiction. Named one of Australia’s Favourite 15 Novelists, Kate has a doctorate in fairy tale studies and is an accredited master storyteller.

The Wild Girl  by Kate Forsyth is storytelling at its best. I enjoyed the richness of the words, the characters who were brought to life and the story which is about love and overcoming adversity. It is a blending of historical fact and fiction. Kate Forsyth has researched the events in the novel and in the afterword the author writes that she listened to the story within the stories that Gretchen told. This helped to plausibly fill in the blanks in Gretchen’s life. 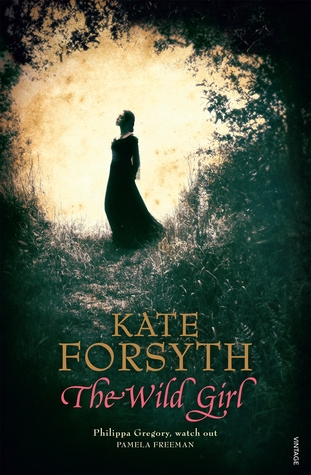 From the back cover:
Dortchen Wild is drawn to the boy next door, young and handsome fairy tale scholar Wilhelm Grimm. They live in the German kingdom of Hessen-Cassel in the early nineteenth century in a time of war. Napoleon Bonaparte wants to conquer all of Europe, and Hessen-Cassel is one of the first kingdoms to fall. Living under French rule, the Grimm brothers decide to save the old tales that had once been told by the firesides of houses grand and small all over the land.
Dortchen knows many beautiful old stories and as she tells them to Wilhelm, their love blossoms. Yet the Grimm family is desperately poor, and Dortchen’s father has other plans for his daughter. Marriage is an impossible dream.
Dortchen can only hope that happy endings are not just the stuff of fairy tales.

As a lover of history The Wild Girl had me turning the pages. I enjoyed the historical facts of Napoleon’s advance, then retreat, through Europe. I have an interest in plants and flowers and found the glimpse into how flowers and herbs were used at the time, as both medicines and to help people achieve their desires, added to the richness of the story.

The abuse that Dortchen suffers at the hands of her father, one of the people in her life who should protect her, was handled well, although one particularly harrowing scene was not to my liking. I can, however, see the need for this scene as it explains future happenings in the plot.

Excerpt from the first page:
‘Snow lay thick on the ground. The lake’s edges were slurred with ice. The only colour was the red rosehips in the briar hedge, and the golden windows of the palace. Violin music lilted into the air, and shadows twirled past the glass panes.’

In The Wild Girl Kate Forysth enchants with her descriptive powers, engages the reader with the story, and most of all Gretchen and Wilhem are vividly brought to life.

Shared from the magical blog of Kate Forsyth

Filed under A Writer’s Notebook, What Elise Wrote