When I lived in London one of my favourite places was the Mount Street Gardens a quiet  residential area in the heart of Mayfair where I spent peaceful summer afternoons reading or writing. The public gardens are a sanctuary hidden behind red-brick mansion blocks and the neo-Gothic Church of the Immaculate Conception. I didn’t live in Mayfair but how I wished I did. I visited London recently and found that the gardens hadn’t changed, it is still the same beautiful space.

Mount Street Gardens has large London plane trees, lawns, plants and shrubs, including laurels and hollies and camellias. Park benches that have been donated by or in memory of people who have loved and used the garden line the paths.  If you are ever in the gardens you might notice in a warm and sheltered spot an Australian silver wattle (a touch of home for this Australian author) and there is a Canary Islands date palm. The gardens provide a home for birds, including robins, magpies, and blackbirds.

The green and open city squares, parks and gardens are an integral part of London and they often have connections to writers from the past and are perfect for a novelist to use in a story. I wrote about Gordon Square, and Tavistock Square where Virginia Woolf once lived, in my recent novel.

My novel that is in draft stage warrants such a setting and my protagonist sets off one morning from a Victorian mansion in Mount Street, for a destination that will change her life forever. And even though it was pouring rain that morning the gardens are so familiar to me it was an easy scene to write. 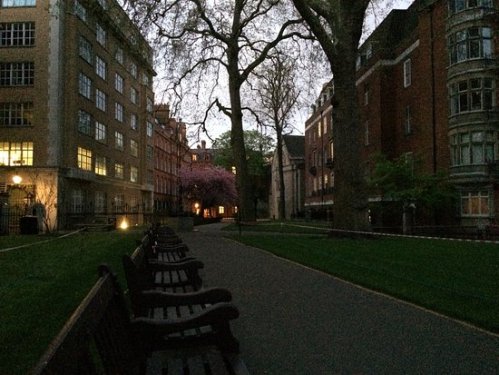 I wrote about an American serviceman in my novel Castle of Dreams and by serendipity discovered a US connection to the gardens during the era part of a new novel is set (I write dual narrative stories set in the past and the present although my WIP is a story of the heart and in a different genre) when I read about a bench inscribed, ‘An American who did not find a park like this in New York City’.  During World War Two, the American Embassy was situated in Grosvenor Square and began to accommodate many US government offices, including the headquarters of General Dwight D. Eisenhower and the  European headquarters of the United States Navy. I later discovered many of the benches were donated by  US citizens who had enjoyed the gardens.

I wouldn’t be surprised if my protagonist meets an American, perhaps a serviceman maybe a spy in the Mount Street Gardens!

In the meantime keep safe in these strange times.

Filed under Castle of Dreams, Elise McCune, What Elise Wrote