This is the second in a series of forgotten women.

Ellen Terry was the Queen of Britain’s stage at the beginning of the twentieth century.

And, while not forgotten in the true sense of the word, unless one has an interest in the history of the theatre it is likely she is not known to you. My introduction to Ellen was many years ago when I found a nineteenth century edition of Shakespeare in a second hand bookshop for a few dollars. Inside I discovered wonderful photographs of Ellen and Henry Irving and other actors as they appeared in various stage roles. The Shakespeare now resides on my daughter’s bookshelf. 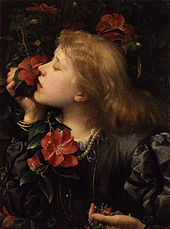 Alice Ellen Terry (she reversed her given names) was born in Coventry, England, the third surviving child born into a theatrical family. Her parents, Benjamin of Irish descent, and Sarah (née Ballard,) of Scottish ancestry, were comic actors in a Portsmouth-based touring company,and had 11 children. With two actors as parents who had already made a reputation for the name Terry and an older sister Kate also on the stage it was ineveritable Ellen became an actress. At least five of her siblings became actors: Kate, Ellen, Marion, Florence, and Fred.Two other children, George and Charles, were connected with theatre management. Kate (the grandmother of John Gielgud) and Marion were particularly successful on stage.  Ellen made her first stage appearance at age nine, as Mamillius, opposite Charles Kean as Leontes, in Shakespeare’s The Winter’s Tale at London’s Princess’s Theatre in 1856.

Between 1861 and 1862, Ellen was engaged by the Royalty Theatre in London, managed by Madame Albina de Rhona, where she acted with W. H. Kendal, Charles Wyndham and other famous actors. In 1863  15-year-old Ellen appeared at the opening of the Theatre Royal, Bath, as Titania in A Midsummer Night’s Dream, then returned to London to join J. B. Buckstone’s company at the Haymarket Theatre in Shakespearean roles as well as in  modern comedies.

n 1878 she joined Henry Irving’s company as his leading lady, and for more than the next two decades she was considered the leading Shakespearean and comic actress in Britain. Two of her most famous roles were Portia in The Merchant of Venice and Beatrice in Much Ado About Nothing. She and Irving also toured with great success in America and Britain.

Ellen Terry is the most beautiful name in the world; it rings like a chime through the last quarter of the nineteenth century, George Bernard Shaw wrote of the Dame Ellen when she was at the height of her career. Their correspondence was a love affair in words.

On Ellen’s death, through her nephew, the famed actor Sir John Gielgud, the family tradition of connection to the theatre continued.

Good writing and have a wonderful week,

Filed under A Writer’s Notebook, Elise McCune, What Elise Wrote