I recently minded Misty, a great little westie. This dog reminds me of Misty. Tenacious, determined and happy.

Hover over photographs to read the legend. 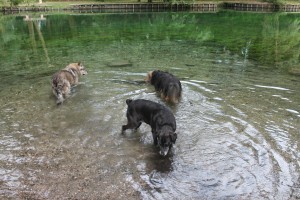 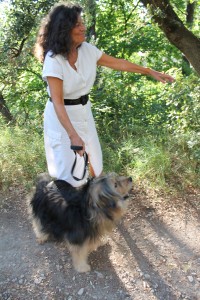 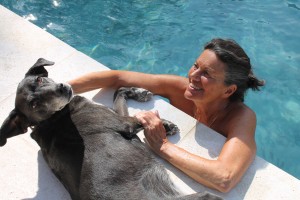 This is a story to truly inspire. Barbara lives on a large property near Avignon, France. Some months after her husband died, she found, UKË, a hairy sheepdog, abandoned in a supermarket carpark, begging for food and obviously starving. Although she already had two ’boutique’ dogs, Barbara took Uke home.

Sometime later, she found MERLIN. He was one of more than 300 dogs in the SPA (Societe Protectrice des Animaux) and had been there since his master died six years before. Merlin was a very fortunate dog because his master’s family continued to pay for his upkeep which saved him from being euthenased. He was less fortunate in living those six years in a dark corner, under stairs, in his own excreta, because although cages at the SPA are cleaned where possible, there is seldom the time or resources to do so.

During his years in the cage, Merlin had never been brushed and his coat was matted with dead blonde hair. Barbara says he was a terrible sight, but had the most tender eyes. Although she knew he did not have a long life ahead, she desperately wanted to save him and give him a few happy years. But there was one small problem: Merlin had shared his cage under the stairs with a little black mongrel, possibly part labrador, called EGI. To save Merlin, Barbara had to take Egi too.

At home, Uke, Egi and Merlin settled into their new lives. Barbara says she filled six large plastic bags with fur brushed from Merlin’s matted coat and he came to love being brushed and made to look beautiful. When rescued from the carpark, Uke had weighed only 13 kgs but he quickly became strong and protective and now weighs 23 kgs. At first Egi was frightened of everything and would hide if a visitor arrived but he too recovered quickly to become Barbara’s shadow, obedient and loving, even sleeping on her bed, his head on her shoulder.

All three dogs love the water and on hot evenings, Barbara takes them for a swim in the river near her home. She also tries to give them an outing each day (Merlin is too old) and Uké and Egi often follow on leads as she plays golf! Barbara says they all sleep in the house in their seperate pre-chosen places and although she is now alone on her large property, she is never afraid with her ‘family’ close by.

This is a happy story — but also a sad one. No sooner had I finished writing the draft above than I had news from Barbara that Merlin had died.

‘A sad day…she emailed… Merlin was having serious breathing difficulties. I could not get him into the car at 40 kgs so went to the vet to pick up a prepared injection to administer at home. After only 30 minutes absence, when I returned he had died of a heart attack. OHHHHH!!! I had him for just over a year and it was just past his 13th birthday. We had a wonderful year together. He was happy and had a wonderful death, but it is so hard…’

Barbara, our sympathy and thoughts are with you at this sad time. But your loss is our inspiration. To make the last year of Merlin’s life comfortable, companionable, safe and surrounded by love, is the greatest gift. There are so many dogs in the world in need of saving and most of us would choose a young dog with our own needs foremost in making that decision. To save an old dog requires the biggest heart, the greatest love. Merlin’s life is his legacy, and you our inspiration. 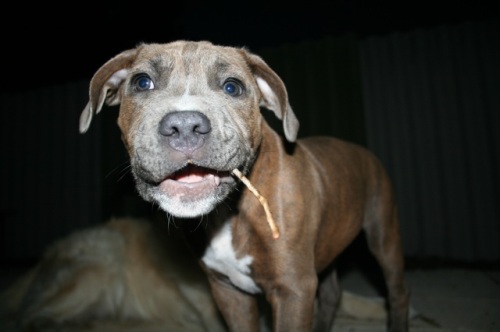 Our family had Howie for fifteen years. Yesterday the vet came and Howie went to doggie heaven. It’s sad to lose a family member but he had a peaceful end. It is kinder for the animal, hard for the family. Our cat Sparky, the Burmese ,sat on the roof and watched the vet carefully…just in case…I heard him say. Today Sparky went to the spot in the garden where Howie used rest …always at the ready to pounce on strangers. Sparky, who is 18 months old, has spent most of the day looking in all the places Howie used to frequent, and calling for him. Our animals are precious and can teach us much about life and caring for others. RIP Howie.