The Age of Light by Whitney Scharer 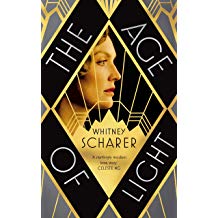 I wrote about a WW2 photographer in my own novel Castle of Dreams and I wrote about light as a means to find my way into the story.
Light streamed in through the window, warmed the varnished timber panelling of their compartment, and encased Vivien with Robert and William, like insects trapped in amber.
Reimagining the lives of famous people who have left an historical legacy is challenging.  I recently read ‘Becoming Mrs Lewis’ by Patti Callaghan and the author inhabits Joy Davidson the wife of C S Lewis. It is a wonderful novel. Now I can’t wait to read The Age of Light a novel about photographer and model, Lee Miller, by Whitney Scharer. I have had an interest in Lee Miller since I found a biography about her on my daughter’s bookshelf some years ago.
The Age of Light is a novel I am going to hurry out to my local bookshop and buy as a gift to myself. Titles are one of the hardest things for a novelist to come up with and this one is perfect.
REVIEW: By Caroline Leavitt GLOBE CORRESPONDENT  JANUARY 30, 2019

Women have always paid a steep price for artistic genius.

Take, for instance, sculptress Camille Claudel, who was as talented as her lover, Rodin, felt he took credit for her work, and spent the last 30 years of her life in an insane asylum. Or consider the painter Dora Maar, who had a long-term relationship with the physically abusive Picasso, before being crippled with a horrific breakdown.

And now here, in her dazzling debut novel, “The Age of Light,’’ the prodigiously talented Whitney Scharer reimagines the life of photographer Lee Miller, who was first a fashion model then a protégé to surrealist Man Ray, eventually coming into her own as a brilliant artist, all the while stubbornly refusing to let the male gaze destroy her own.

Scharer, who flipped the script by commanding a seven-figure advance for her own artistry, offers a kind of transcendent ghost story, where the past never seems to leave the present’s side. Her narrative moves hypnotically back and forth through time and through three very different Lees, starting with her early days in glittering Paris with Man (as Lee refers to him), when she’s just 22. After meeting the artist in an opium den, she rejects his offers to be just his model, muse, or lover, and instead determinedly pushes him to teach her how to print a photograph the right way.

But Man betrays her, claiming Lee’s work as his own, even though he had no hand in it, giving her the reason that “[y]our eye is my eye. You’re my model. My assistant. My lover.” How could Lee do anything else but plot her own revenge?

There is the Lee Miller who photographs the devastation of World War II, giving up her silks and satins for rugged army pants.

And there is finally the Lee Miller who retreats to a farm with her British painter husband Roland, becoming a food writer and Cordon Bleu chef, grappling with her rage about how things turned out for her, and cooking up recipes and articles instead of adventures.

But then her editor prods her to give up her food writing and instead tell the blistering story of her time with Man Ray, and while the editor is interested in the more famous man, Lee knows the story is truly hers, not his, and she insists on one very telling condition: All photographs used in the piece must be hers, rather than Man’s.

Lee is haunted by this story, but she also carries with her other betrayals and tragedies — all by men she trusted — striking the narrative like little electric shocks. An uncle rapes her when she’s just a girl. Her adored father urges her to take her dress off and stand naked so he can capture her nudity on film. Are these men any different from Man whose love for Lee comes with a price tag: that he be allowed to use her for his own purposes?
The book is so much about the difference in what we believe to be true and what is true, how a photograph can be absolute truth (Lee takes a photo of Buchenwald and captions it “Believe It”) or manipulated (What is more deliberately artificial than a fashion shoot?). But when it comes to herself and her life, the lines of reality blur for Lee. When Lee herself is photographed, she floats out of her body, completely unmoored in the moment. She even observes her own relationship with Man from a distance, as if she might be another person watching and judging, daring Lee to prove that they are a couple.

Part of the heady pleasure of Scharer’s novel is the writing, which is as seductive and beautiful as her descriptions of the shimmery satin kimonos in the opium den. Juxtaposed with that flossy Paris time is the war, where she points out “the bombed-out tableaux arranged before her like the work of some Surrealist set designer. A church destroyed, but a typewriter balanced on the rubble before it.’’ There are “malnourished babies dying in Viennese hospitals, their rib cages delicate as pick-up sticks.” And finally, there is food and drink, so intensely presented that your mouth might water, including a “baked Camembert, so rich and stinky it makes Lee’s tongue ache,” and the pleasure of a gin martini, “cold and clear as a glass of diamonds.”

An absolutely gorgeous and feminist novel about art, love, and ownership, “The Age of Light’’ is truly a work of art in itself, both deeply moving and thrilling. Want to know what it’s like to be an artist? Read this astonishing novel and then, like Lee Miller, take time to consider the extraordinary cost she paid to be herself.

THE AGE OF LIGHT