What Elise Wrote-Castle of Dreams

Castle of Dreams will be released by Allen & Unwin on 27th April, 2016. It is a dual narrative story set in two different time periods.

I love to research but I do have a few tips.

I read primary sources like diaries, letters and newspaper reports (Trove is wonderful!). I read books written about and of the period I am researching. I google but online information can be inaccurate so be careful and check more than one source. I use my wonderful local library and inter-library loans for books I don’t necessarily want to keep on my bookshelf, and also, I always read bibliographies carefully in each book as they are a source of more information on the subject you are researching.

I talk to experts in the area I am writing about. I have a military friend who is also a writer of novels and as one period of Castle of Dreams was set in WW2 during the Pacific War I asked him many questions and most importantly I could rely on his answers.

I have read all Kate Morton’s books which I loved and note that she studied and earned a Licentiate in Speech and Drama from Trinity College London. I have often wondered if this the reason Kate can so immerse herself in the character she is writing about that I feel I am that person. It certainly makes for a page turning book. And Kate writes about the things and places I love: mystery, England, Cornwall, and history all sprinkled with a touch of magic.

A ruined castle deep in the rainforest holds a secret that unites three generations of women: two sisters who find themselves in love with the same man as the Second World War rages and, decades later, a young woman determined to uncover the secrets in her grandmother’s hidden past.

Growing up together in a mysterious castle in northern Queensland, Rose and Vivien Blake are very close sisters. But during the Second World War their relationship becomes strained when they each fall in love with the same dashing but enigmatic American soldier.

Rose’s daughter, Linda, has long sensed a secret in her mother’s past, but Rose has always resisted Linda’s questions, preferring to focus on the present.

Years later Rose’s granddaughter, Stella, also becomes fascinated by the shroud of secrecy surrounding her grandmother’s life. Intent on unravelling the truth, she visits the now-ruined castle where Rose and Vivien grew up to see if she can find out more.

Captivating and compelling, Castle of Dreams is about love, secrets, lies – and the perils of delving into the past . . .

“The taxi arrived at eleven. Vivien said goodnight to Mrs Sherman and Cecily and patted Mercury. It was only when William walked her out to the porch that she noticed his limp.

He looked down and caught her puzzled expression. ‘Fromelles,’ he said quietly. ‘I wear an artificial leg.’

The balmy night air brought the scent of roses and summer jasmine, tubs of gardenias gleamed in the moonlight, and she could hear water tinkling in a nearby fountain. William, shining a small torch before them on the path, escorted Vivien to the front gate and into the taxi as rain began to fall over the leafy suburb.”

Photos of the Castillo de Suenos aka (Paronella Park)

This is the natural pool under the falls where Vivien and Rose learnt to swim. 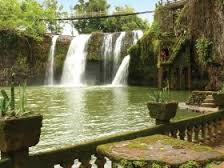 The concrete tables where Vivien and Rose would throw their towels before they had a swim. 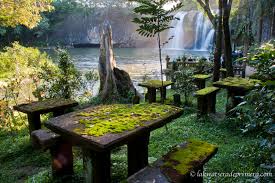 This is the staircase leading from the castle to the pool.

And today you can get married in the rainforest at 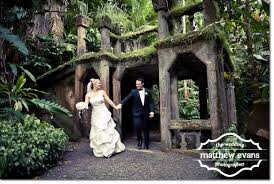 9 responses to “What Elise Wrote-Castle of Dreams”