The Selexyz Dominicanen bookstore in Maastricht

In the Classical world, Mercury, the god of merchants, was also considered the messenger of the gods and the protector of swindlers. Since then, trade has been traditionally labeled as “amoral,” a notion that gained ground during Christianity, when St. Nicholas was named the patron saint of thieves and merchants and St. Thomas Aquinas concluded that traders would be kept from entering the Kingdom of Heaven seeing that temptation figured as an integral part of their profession.

The disorientation visitors encounter upon entering the Selexyz Dominicanen bookstore in Maastricht is likely atavic in nature. The building that houses the store is in fact a Gothic church consecrated in 1294 by the Order of Predicators founded by St. Dominic. The church has not hosted a religious function since 1794, when the church was confiscated by Napoleon’s army for military purposes. Since then, the space has been used as a town archive, warehouse and even an inglorious site for bike storage. In 2005, Boekhandels Groep Nederland (BGN) decided to give new life to the building by transforming it into what is now one of the world’s most incredible bookstores.

The interior design by the Amsterdam-based firm Merkx+Girod Architecten creates retail space by taking advantage of the spatial magnificence of the church’s architecture. To satisfy BGN’s need for 1,200 m2 of selling space and given that the church’s floor area is of only 750 m2, Evelyn Merkx and Patrice Girod thought to insert an over-sized walk-in bookcase. The two upper levels therefore compensate for the lack of surface area, enabling the transversal use of space.

The imposing bookcase created by Keijsers Interior Projects is positioned on the right side of the building, between the central and lateral naves, and encompasses the stone columns. A series of stairs lead visitors up the black steel walk-in bookcase, providing an up close and personal view of the vaults of the nave, enthralling them with a nearsighted view of the frescoes and revealing an unknown perspective. In stark contrast, the left side of the church retains the original height of the building with low tables placed parallel to the central nave as if to lead the visitor toward a sort of hypothetical altar. The left nave features low, horizontal tables and vertical book shelves along the walls to create thematic islands separated by the steady rhythm of the columns. The lighting, which is an all but integral part of the store’s design, manifests itself in the chorus by way of a traditional chandelier above the crucifix-shaped table located in the café area. Here, with the left side housing the bar area, a series of tables, poufs and armchairs mimic the curved line of the chorus to a raised platform.

The Selexyz Dominicanen bookstore, for which Merkx+Girod was awarded the Lensvelt de Architect prize in 2007, welcomes about 700,000 visitors each year and showcases 25,000 books and 45,000 volumes.

Another photo for my 40’s collection…

The Coffee Shop of the Selexyz Bookstore in Maastricht

Joan Grant (April 12, 1907 – February 3, 1989) was an author of historical novels and reincarnationist. Her first and most famous novel was Winged Pharaoh (1937). Grant shot to unexpected fame upon publication. The New York Times hailed it as “A book of fine idealism, deep compassion and a spiritual quality pure and bright as flame'” a sentiment echoed in countless reviews the world over. What her readers did not officially know for almost another twenty years, was that Joan claimed to have recalled the events in Winged Pharaoh while in a hypnotic or trance-like state, dictating piecemeal the lifetime that she believed herself to have lived. The book is still considered a cult classic by believers in the New Age religion. It was followed by other historical fantasies, or as Grant called them, “Far Memory books,” or “previous life autobiographies”. This book was initially accepted as a novel; Grant’s first husband, a barrister and Egyptologist spent many years prior to WW11 working on excavations in Egypt and as Joan accompanied him on some of these expeditions she was quite aware of many facets of Egyptian history. “Winged Pharaoh” was claimed by some to in fact be a re-incarnationist autobiography. Historians claimed that the calendar used in the book had never existed and also that there was no evidence whatsoever for the existence of an avenue of trees referred to in the book. After WW11 a text was found which when translated proved to be the calendar referred to by Grant in the 1937 book.
Joan Grant’s father was of dual US-British nationality – a real tennis player who won his place in the semi- finals of the World Championship for each country and, thus needing to play against himself. He also carried out at his own expense valuable pioneering work on the Anopheles Mosquito for which purpose he had installed a full research unit on Hayling Island.
Joan Grant spent her early years on Hayling Island in Hampshire and as a young woman won the Hampshire Ladies Golf finals – having never before played golf!
Grant strove to disabuse herself and her readers of preconceptions, to eschew what she called ‘group-think’. She was not interested in blind faith and blind belief, but in what could be perceived as true by the five senses. She claimed to have an unusual gift of “far memory” — the ability to remember previous lives, and something she referred to as “sensory awareness”. She said that she experienced many realities that are not available to most people.
A collection of previously unknown writings by Grant was published as Speaking from the Heart: Ethics, Reincarnation & What it Means to Be Human in 2007 by Overlook Press in the USA and Duckworth Press in the UK. It was edited by her granddaughter Nicola Bennett, with anthologist Jane Lahr and Joan’s closest friend Sophia Rosoff. The book contains poetry, essays and a series of lectures she gave at Edgar Cayce’s Association for Research and Enlightenment in Virginia Beach. She had a reputation for talking and writing with clear certainty about her belief in other realities, past lives, and death. She said that for her, the veil between the “worlds” simply did not exist.
With her third husband, Denys Kelsey, she wrote Many Lifetimes, in which she explained how she supposedly remembered her own and others’ past lives. Prior to her marriage with Dr Kelsey Joan Grant was married to Charles Beatty, also a writer, first manager of the Montague Motor Museum in Beaulieu and one of the first announcers on Radio Luxembourg. Charles Beatty transcribed some of Joan Grant’s earlier books from a wire voice recorder.
She also wrote several children’s books which contain stories she claimed she was told in past lives.
Some of her books were published under the names Joan M. Grant and Joan Marshall Grant.
Her books have been translated and published in many languages.
Bibliography
• Winged Pharaoh (1937)
• Life As Carola (October 26, 1939)
• Eyes Of Horus (1942)
• The Scarlet Fish (1942)
• Lord Of The Horizon (June 3, 1943)
• Redskin Morning (1944)
• Scarlet Feather (1945)
• Return To Elysium (1947)
• Vague Vacation (1947)
• The Laird And The Lady (1949)
• So Moses Was Born (1952)
• Time Out Of Mind (1956)
• Far Memory (1956)
• A Lot To Remember (1962)
• Many Lifetimes (1968)
• Speaking from the Heart (2007)

Speaking from the Heart 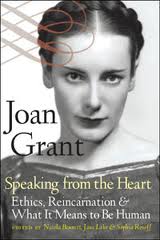 Writers around the world who have not yet published a book, now is your chance!
More details can be found on the Shakespeare and Company website.
About The Prize
The Paris Literary Prize is an international novella competition for unpublished writers. Any topic is welcome.
Shakespeare and Company has a long-standing tradition of opening its doors to aspiring writers and in keeping with that philosophy, the 10,000€ Paris Literary Prize is open to writers from around the world who have not yet published a book.
We have long been admirers of the novella, a genre which includes such classics as The Old Man and the Sea, Animal Farm, L’Étranger and The Prime of Miss Jean Brodie. The Paris Literary Prize celebrates this small but perfectly formed genre while giving a unique opportunity to writers whose voices have not yet been heard.
Awards
There are three Paris Literary Prize awards:

The Paris Literary Prize award: 10,000 Euros
Two Paris Literary Prize Runner-up awards: 2,000 Euros each
All three winners will be invited to a weekend stay in Paris to attend the
Prize ceremony and read from their work at a special event at
Shakespeare and Company.
Last year, the winner of the Paris Literary Prize was Rosa Rankin-Gee for The Last Kings of Sark ; the two runners-up were Adam Biles for Grey Cats, and Agustin Maes for Newborn.
Selection Process & Jury
The selection process for the Paris Literary Prize occurs in two phases. First, our dedicated team of readers (numbering 12 in 2011) goes through each submission in search of exceptional stories, voices and craft and a long list of roughly 10% of entrants is then chosen for closer inspection. After many hours of reading and debate, this is again reduced to form the short list, between 10 and 15 entrants. This is where our Jury takes over, spending a month with the texts before selecting the winner and two runners-up.
To ensure the quality and diversity of the selections, each submission is considered by several readers (for instance, in 2011 each text was viewed at least five times).
The identity of all entrants is withheld throughout the process.
2012 Jury
Erica Wagner will again be chairing the jury for this year’s prize, with the remaining members to be decided shortly. For the list of 2011 readers and jury go to the Paris Literary Prize site.

An historical image of an exotic city.

Life is always on the edge of death; narrow streets lead to the same place as wide avenues, and a little candle burns itself out just like a flaming torch does. I choose my own way to burn.

Sophia Magdalena Scholl (9 May 1921 – 22 February 1943) was a member of the White Rose non-violent resistance movement during Nazi regime in Germany. She was arrested on 18 February 1943, convicted of treason four days later and executed by guillotine a few hours after that. 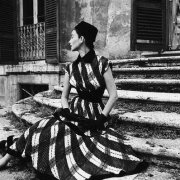 Image from astimegoesbuy blog – a great blog for fashion